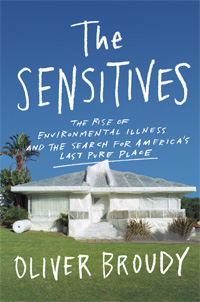 Somewhere in the piney wilds of northern Arizona a man has gone missing. His friends and followers fear he has committed suicide. For those of his peculiar tribe, bankrupted by medical bills, tormented by symptoms they cannot understand, dismissed as crazy by their own families, death is just the final step in a long retreat from a world that has become as alien and inhospitable as Mars.

Environmental Illness (EI) has been called the defining ailment of our time—not just because it is characterized by a violent reactivity to all the trappings of modernity (everything from the pesticides on our produce to the fire retardants in our electronics) but because, at a time when it has never been more difficult to distinguish between what is fact and what is distortion or mere hysteria, no one is sure if it exists.

In academia, medical journals and internet forums the debate rages—even as environmental regulations are being eviscerated, the chemical industry is releasing nearly four billion pounds of chemicals into the environment every year, and the prevalence of thyroid and liver cancer, autism, birth defects, and male reproductive problems is skyrocketing. Meanwhile, thousands of people suffering from EI, called “sensitives,” have withdrawn to the country’s few remaining unpeopled regions to construct frontier lives far from the stench of civilization.

One of these is the man who has gone missing, Brian Welsh, a leader among an online community of fellow sensitives he has never even met. The Sensitives takes us on a search for Welsh, through empty miles of primordial landscape and branching side paths into the past, where the history of charlatanism, German metaphysics, early American medicine, the origins of color, and a host of other fascinating subjects hold clues to a deeper sickness underlying modern healthcare itself—and what can be done to cure it.

What the Critics Are Saying

“With a tone that is both thoughtful and humorous, The Sensitives provides a model for how history, philosophy, research, clinical practice, and—above all—patient experience, inform meaningful discourse about a disease that resists characterization at all stages.” —Science

“Broudy’s writing inspires real empathy for the individuals he chronicles, individuals who can’t seem to get well or get help.” —The New York Times

“A thoroughly engaging investigation… Neither an invective of medical politics, nor a sideshow of eccentric recluses, The Sensitives pleads for understanding in a fight over a syndrome not yet understood.” —Shelf Awareness

“Learning about EI is fascinating and even infuriating, but the excursion and bonding experience between the author and his travel companion is even more intriguing. Over miles of open road, Broudy and James learn more about each other and themselves, and the reader is educated about a chemical threat that is ‘woven into the fabric of everyday life.’ The Sensitives is one road trip you’ll want to take.” —BookPage

Buy the book on Amazon

Buy the book on Indie Bound

The deepest riddle of Christianity is only this: How could anyone possibly believe it? In answer to this question, The Convert tells the true story of one man’s punishing journey across the extremes of human experience, through fire and heartbreak, passion and betrayal, prison and madness, to the very brink of belief. It’s the story of one man and one moment, the moment of God’s triumph, or sanity’s defeat.

“This is an extraordinary piece of writing. Nuanced, intelligent and, above all, honest, The Convert operates on several levels. It is the gripping personal story of one man and his struggle to overcome a series of tragedies. It is also a refreshingly clear-eyed meditation on faith. The Convert will make atheists and believers alike question their assumptions and, just maybe, find common ground.” —Eric Weiner, author of Man Seeks God: My Flirtations with the Divine

“Erin Mounsey is a survivor of horrific burns whose backstory is widely available online. The Convert, too, tells his story, but this is no mere pedestrian profile; rather it is a tale that reads as if it were almost palpably difficult for its unapologetic atheist author to tell. As Broudy himself says, “This is not an argument. This is the story of one man’s odyssey from atheism to belief.” As these things go, it must rank as one of the most dramatic since that of St. Paul, so rich, virtuosic, and memorable that the temptation to shout its highlights from the rooftops grapples with the contrary desire to give almost nothing away, the better to let interested readers discover its deep well of poignantly challenging charms for themselves. Suffice it to say that if there’s a more accomplished chronicler of existential ambivalence alive today, please bring him or her to my attention. In the meantime, Oliver Broudy’s growing collection of Kindle Singles will do just fine.” —Jason Kirk, Amazon.com 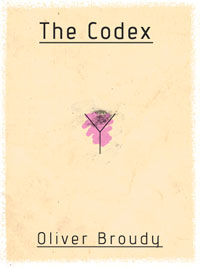 “On its surface, The Codex is a coyly unfolding narrative of an adventure to Prague in pursuit of the meaning of a strange book: “a book of profound moral ambiguity, both beautiful and bizarre, alluring and repellent. A book so explicit that it would be banned by any public library, a book whose pages chronicled the extinction of mystery, and at the same time spawned new mysteries just by existing.” Along the way, he meets an outspoken cosmetic surgeon, a mysterious artist of the female form, and—perhaps—the key to his own ambivalence about adulthood. As with his first Kindle Single, The Saint, Broudy’s multi-dimensional narrative rests on a keen succession of nested structures, in this case a profile wrapped in another profile couched in a memoir, of sorts. At the level of craft, this alone identifies Broudy as a rising talent. Add the lushness of his language and a succession of scalping insights into modern life, and The Codex makes a compelling case for Oliver Broudy’s emergence among the master essayists at work today.” —Jason Kirk, Amazon.com

“Lyrical, provocative, the mysterious Codex stays with you long after you’ve turned the last page.” —Jennifer 8. Lee, author of The Fortune Cookie Chronicles

“This is going to be an adventure,” James says presciently. “I have a feeling both of us are going to be very different after this.” And so it proves, as one jaded New Yorker is swept by a spiritually radiant revolutionary on a journey of transformation, from the narcissistic bubble of New York City to the sweeping vistas of the Dhauladhar mountains in northern India. Along the way the mismatched duo cross paths with rogue Chinese agents, the incensed descendents of Mahatma Gandhi, and ultimately the Dalai Lama himself. A gripping blend of action, intelligence, and insight.

Read about the origin of the story here.

“This small, extraordinary book has more to say about life, disappointment, New York, Tibet, India, the holy, and the profane, than most other books could say in ten times as many pages. Oliver Broudy’s astounding, funny, harrowing, and finally quite sad experience with a millionaire philanthropist and arch eccentric—a man as saintly as he is demonic–is conveyed in prose as startling as cold water. This is a book I deeply envy, a book I will read again—probably immediately.” —Tom Bissell, author of Extra Lives: Why Video Games Matter